While I had my engine out of my sailboat this spring, I earnestly(!) thought of good proactive, preventative maintenance I could carry out while being able to walk around the engine and access the top and all four sides with ease.

I’d seen horror examples of clogged heat exchangers on the internet and the disassembly process was not excessively daunting, so I thought I would give it a try.  On a Yanmar 3GM30F there are two end caps on the heat exchanger, and a central cylinder element that can be slid out and cleaned.  Here is what the forward/front end cap looks like.  I’m pointing out the entry point for the seawater pumped by the impeller.

There is another similar cap in the back, most easily unbolted after removing the exhaust elbow assembly.  Removing the cap reveals copper tubing through which the cold seawater passes on its way to the exhaust system.   There was some accumulated gunk on the face of the cylinder, but the tubes were all clear and free-flowing.  Good news. 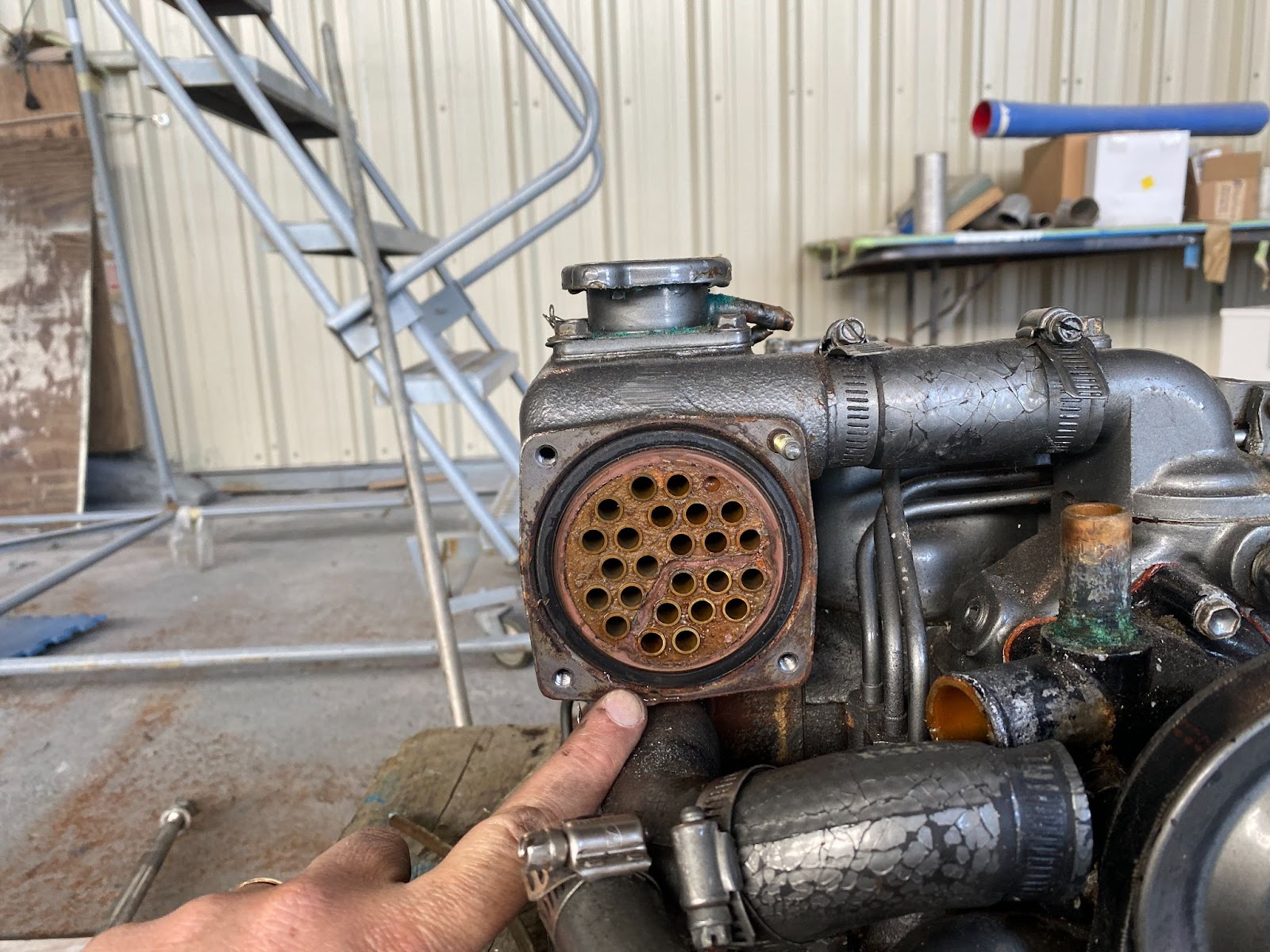 Once I pulled the cylinder out of the exchanger body, I discovered quite a lot of mucky sediment.   Was it rust?  Mud from the bottom of the San Francisco Bay?  Hmm.

I was able to wash the majority out of the removable cylinder quite easily.  It didn’t have an oily quality.  It just seemed like very fine mud.  The interior of the heat exchange body also had an accumulated film of gunk, and my hand is too big to fit inside and do any real cleaning.

The cylinder itself I could take home and soak thoroughly clean.

I also inferred that whatever gunk was inside the heat exchanger body was also in the entire coolant path around the engine cylinders.  I went inside the boat and saw that in the coolant expansion tank there was a good deal of accumulated sediment as well.  Hmmm.

I checked the internet and obtained a variety of potential diagnoses.  Oil seeping into the coolant loop (adios to such an engine) or silicates dropping out from mixed coolant.  More on that later.  The interweb suggested that an over-the-counter radiator cleaner fluid might be a good first step.

I also consulted the wise folks on the Ericson Yacht forum about my gunk and what to do about it.  It seemed like it was probably not a death knell for my engine.

I reassembled my heat exchanger.  It takes two sets of O-rings, and I bought both sets from my local Yanmar dealer, List Marine.   I suspect I could have purchased them on-line for less, but I would prefer to have a friendly relationship with my local retailer for when I really need help.

Here are the gaskets that nestle in the end caps.

I tightened up the bolts with some special paste to prevent them from seizing and corroding in the future.

Here’s a youtuber who uses the same stuff to clean out his car’s radiator:

How to SUPER FLUSH your Cars Cooling System

Nothing earth-shattering, but an example of repeated flushing.

In the flush liquid, beyond distilled water, the active ingredient in the solution is something called sodium citrate.  If one googles sodium citrate, the majority of results relate to the presence of sodium citrate in Kraft Macaroni and Cheese sauce mix.  You know, a fella can take that either as a sign of the silliness of pouring this stuff into his coolant loop as a cleanser, or wonder about whether the Kraft industrial food complex is actually a secret plot against the intestinal tracts of America’s children.  I digress.

I poured the coolant flush and distilled water into the engine and ran it.  The engine has to reach an operating temperature sufficiently high such that the thermostat will open and allow the coolant to circulate through the heat exchanger.  My engine holds 0.9 gallons of coolant, plus about another 0.6 gallons in a loop that extends to my water heater.

I drained the coolant from the engine with a valve fairly easily.  To get the old fluid out of the water heater loop, I developed the RBH technique.  RBH stands for reverse bong huffing.  This is a sophisticated technique in which one detaches one of the two rubber hoses carrying coolant into the engine block, grabs the end of the hose and then puffs a bunch of air into the hose to pressurize the coolant back into the engine block where it can be drained by the engine valve.

It was a tedious process as I wanted to make sure the engine was hot enough for the thermostat to open, but then wait for the coolant (distilled water) to cool off sufficiently such that I could drain it into my milk jug receptacle.  There’s a fun game you can play with this process called, “Will it melt the milk jug?  Or will it burn my hands too much to hold the jug by the drain valve?”  It’s one of those games you can only lose if you play.

I checked with my Yanmar dealer about what kind of coolant I should be running.  They sold me this stuff:

If you go to your local auto parts store and consult the coolant display aisle you’ll find one of the last places in America where products are enumerated with culturally sensitive labels.  If you buy coolant for “Asian” motors, you’ll probably get this color.  I’m pretty sure “Murican” motors get the green.  There’s another choice for “European” motors.

In any case, I still haven’t explained how I got my sludge in the first place.  When I bought my boat, it had Prestone Green coolant and it seemed to work fine.  I had never had problems with the engine overheating.

As I was cleaning up after all the multi-flushing (and for the record, I took the sludge water to my local Jiffy Lube after collection) I opened my dock box.  In the dock box I found a gallon jug of West Marine PURPLE antifreeze about 2/3rds full.  This ex-post analysis occurred in late June.

Sifting through my memory bank, I think what happened was that before my “big cruise” in February, in a fit of earnestness I decided I should top-up my coolant since I anticipated running the motor a good deal.  I think I went to West Marine, found a bottle that said, ‘good for diesel engines’ and then knowing I had a diesel engine, purchased the product and poured some into my engine.

Now I have come to appreciate that “something that everyone knows” is that one should never mix engine coolant colors.  Or else bad things will happen, silicates will drop out, and one will obtain a thin film of sludge mud throughout his coolant system.  I guess I’ve learned that the hard way.

One final point, I might have been better off to remove the thermostat from the engine, and then run a garden hose through the coolant loop to blast out all of the sludge.  If I start to encounter any overheating problems, I might go that far.  But as to now, Hakuna Matata.