For those just arriving at my storyline, I recently went for a solo cruise and crashed my boat on the way home.  I hauled out my boat and debated whether or not I should walk away and take the insurance money to buy another boat.  I decided to buy back my boat and while the boat has been out of the water, I have done work on my quadrant, rudder packing, and prop shaft packing.  The boatyard finally got around to removing my keel and I had some damaged keel bolts.

The end goal of all of this work is to define a solution for the damage to my hull.  Once the keel was removed, that permitted the boatyard to do some ‘exploratory grinding’ on the underside of the hull.

They used a flap disc grinding wheel like this one.

The area at the rear of the keel  is of concern because when my boat struck the rock and the boat tipped forward, the keel was shoved up into the hull.  Here’s what the underside of the aft end of the keel stub looks like now, post-grinding:

The center of the hole is located under the companionway stairs and the front face of the engine.  This drawing from Sailboatdata.com is remarkably accurate:

The Ericson “Tri Axial Force Grid” is the support system that gives structure to the boat and also creates the framework for the engine bay and engine mounts.  The stringers that support the engine in this area are also nearby and present a challenge to accessing the aft end of the keel stub from the inside of the boat.

It was decided by the boatyard that the best and only way to do a proper repair was to remove the engine and cut out the grid below the engine to allow fiberglass to be applied properly.  I thought that one could probably access everything without taking out the engine, but the last thing I want to have at the end of this process is finger-pointing and the supposition, “You didn’t want to pay up for us to do the job correctly…”  So, remove the engine we did.

I volunteered to unhook the various hoses and wires from the engine and it was less difficult than I had feared.  I started with my fully-functional installation:

The next phase is to take everything off (hoses, wires, control cables) while retaining a careful-enough record of how things were arranged originally such that one can put everything back the right way.

I drained the coolant as best as I could with the manufacturer-provided drain valve on the port side of the Yanmar 3GM30f:

I tried to take a picture of each area before I removed a part.  For instance, here are the two hoses that send coolant to and from my hot water heater:

A particular bolt on the port side is used to mount the factory wiring harness out of harm’s way, as indicated by my grotesquely out-of-proportion hand:

I feared the motor mount nuts might be rusted and difficult to access.  They turned out to be quite easy to unscrew, once started.  In all, it only took me about an hour and a half to undo everything.

I told the boatyard that the engine was ready to be pulled out.

Nothing happened for a couple of days.

I went to the boatyard and asked if they had pulled out the engine.  They had not.

A day or two later I received an e-mail, “Engine is out!”  Good news.  I kind of wish I had been there to see it come out, but maybe it’s like keeping the father out of the delivery room.  Generally smoother if the people involved  don’t have excessive emotional attachment.

A forklift with a chain hand-ratchet was used. 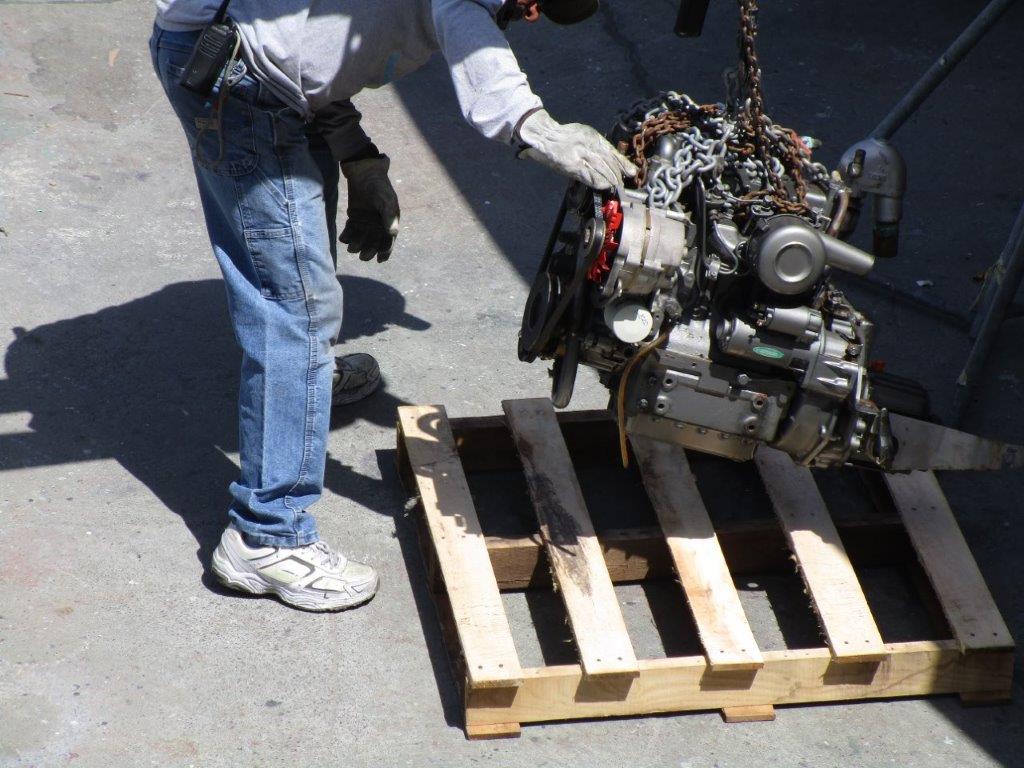 I came to the yard later in the day to see the Yanmar up close and released from the snug confines of the boat.

The engine is in a shed and I know I will rarely get such a good opportunity to work on it as I have now with each side being easily accessible.

Of course it turns out there was one hose I had neglected to remove, which the boatyard found and then carefully detached during the lift process.  By “carefully detached” I mean cut with whatever sharp blade was handy.  This is/was a fuel line.

I’ll have more to say about projects on the engine while it is out, but I note that there are special mounts on the engine that seem designed especially with the process of lifting the block out of a boat.  Here is a picture of one of the two: