A careful user of a sailboat (or any boat, really) should want to periodically know the answer to the questions:

How well-charged are my batteries?

Is my alternator operating normally?

A careful installer of a system monitoring the batteries and power supply of the same sailboat will ask related questions:

How do I let my battery monitor know what kind of a battery (chemistry, size etc.) it is monitoring?

How do I program my alternator regulator so that it outputs the correct voltage and amperage for a given battery?

Balmar’s SmartLink network is the company’s answer to these four questions and is the system that I have adopted on my boat.  SmartLink is a point-to-point network, and following instructions sifted out online, mine is set up as follows: 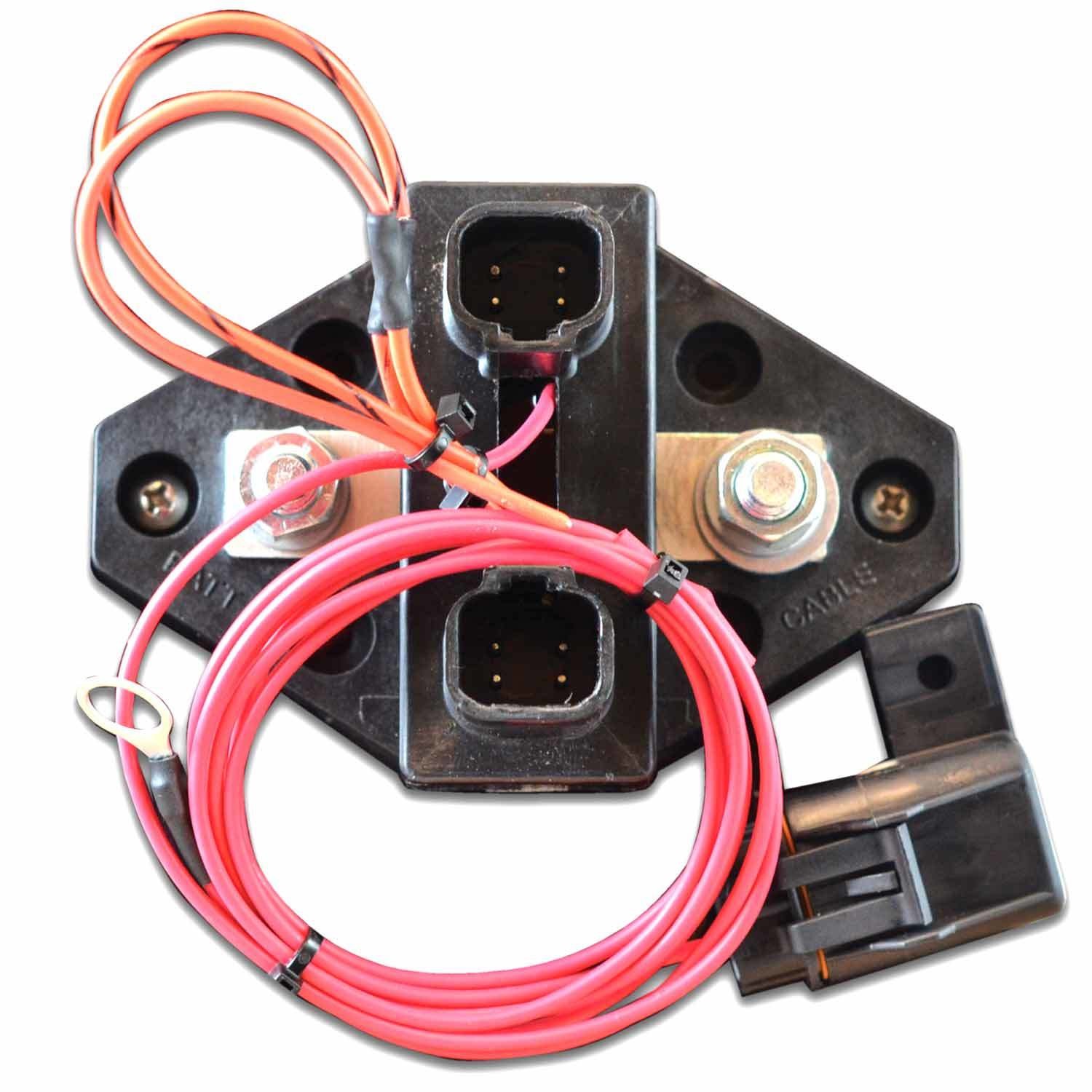 The network starts with the SmartShunt that is installed on the negative battery cable, just before connection to the battery.  Electricity gets pulled out of the battery by various energy-consuming devices and then makes its way back to the battery, via the big horizontal metal bar with bolts on both sides in the picture above.  The amperage can be measured by this bar, which is the shunt.

The red wire is attached to the positive terminal of the battery being monitored, and from this wire, the battery’s voltage can be observed.  With a connection to the negative side of the electrical system (the shunt) and the positive side of the system (the voltage observer) the shunt is able to provide power to the overall network.  The picture shows two four pin jacks.  Two of the four pins are devoted to positive and negative power provision.  The SmartShunt steps down from the ambient 12volt current to 4.7 volts for network use.

In addition to the battery whose current and voltage are being monitored by the shunt, the unit can also read the voltage (and only the voltage) of two additional batteries.

The power from two wires and the information about amperage and current from the monitored battery are transmitted back to an SG200 display (shown) via a four-wire cable with Deutch connectors.  Evidently the SG200 does a better job of monitoring batteries than predecessor systems.  Here’s an interview with ubiquitous sailboat electronics guru Rodd “MaineSail” Collins about testing his company performed on the unit:

With a SmartShunt installed, the display installed, and a wire in between, user has the basic framework for a SmartLink network.  I purchased a package with these three components for a little over $200.  Here is the wiring diagram from the manual.  Note that the SG-200 display has two female network sockets at the rear (light blue plastic case).  The connecting cable can be plugged into either available slot.

One can program the battery type via the single button on the face of the SG200 display or use the optional Bluetooth Gateway and Balmar App..

Another way of programming the battery type details is to do so via a Bluetooth Gateway paired with an App from Balmar.  The gateway is not terribly expensive at $50 but I still might have considered it overkill had I not wanted to also be able to program my alternator regulator.

The Master Charge 618 is Balmar’s latest-and-greatest 12volt alternator regulator and can be connected to and programmed via the SmartLink network provided the Bluetooth gateway has been purchased and is functioning.  To make this connection, one is expected to purchase an adaptor cable:

This adaptor cable plugs into two spade terminal connectors (numbers 10 and 11) integral to the MC618.  The diagram from the regulator manual looks like this:

If you are a clever and willing person, you could probably fabricate your own network cable connector with a Deutsch connector on one end and two spade connectors on the other end.  I did not do this because I did not want to introduce my own inexperience into the build process except where necessary.

The expectation from Balmar is that with one end of the cable attached to the alternator regulator, the other end will connect to an available socket in a/the SmartShunt in the system.

For my installation, the Gateway + Display + Shunt + Regulator + the right wires in between, constitutes the entirety of the physical components.

Balmar offers a free proprietary app (available for Android and iOS) that will connect to a SmartLink system via the BlueTooth gateway.  Once the app is installed, the phone or device will invite the user to connect to whatever Balmar Bluetooth gateways the phone finds in the vicinity.  This worked easily for me.

Once connected, the app shows the gateway searching for connected devices and then displays what it finds..  If you have an MC618 alternator regulator attached, it will only appear if it is awake and the MC618 only lights up if it sees the ignition is turned on, so you have to turn on your ignition if you want to see the regulator on your network.

New firmware updates were available for my display, smart shunt, and bluetooth

Step 2: Set, via the shunt, parameters for battery being monitored

By clicking on the SmartShunt device listed, one can set the relevant parameters for the battery being monitored.

Every time a user changes the chemistry type of the battery, the rest of the settings are wiped out.  Even if you choose the same type of battery as you had previously selected.  I regard this application behavior as junior-varsity coding.  At a minimum there should be a pop-up box that explains what you are about to do by altering the chemistry type.

I don’t know where in physical terms the data parameters are actually being stored on the network.  I presume on the device being examined (so on the shunt for the battery parameters).

Without the Bluetooth gateway this programming can be similarly accomplished by using combinations of short and long button presses.

The MC618 comes with preset profiles for various battery types.  By accessing the regulator via the app, a user can choose one of these pre-set profiles, or set up his/her own by accessing the advanced programming feature.

One can also adjust the “belt load manager” feature, which is a means of governing the field output of the alternator.  I programmed my regulator for Renogy lithium batteries as best as I could.  The specifics of the parameters are involved, and the subject of a separate post on the topic.

If you do not want to use the Bluetooth Gateway and the SmartLink network to program you alternator regulator, you can still do so by using a magnetic reed switch.  After reading about the process, it seemed obvious to me that if I could accomplish the same task with an app and a $50 bluetooth connector, that would be a superior choice for my skill set and patience.

Once steps 1-3 are complete (updated firmware, programmed battery monitor and regulator) you can begin using the network as one would normally.  Data can be read from the dashboard display:

Or via the app:

The app also lets a user see what is going on with the networked alternator and regulator:

Having a “Bluetooth Connection Network” on my sailboat initially seemed like a “golly-gee” technology-for-the-sake-of-technology idea.  One that would make Bernard Moitessier turn in his grave (!).  I came to appreciate that a big part of the value of the App and Bluetooth is in the initial programming phase.  If you don’t use the app, you are relying on the single-button display to program your battery monitor parameters.  You do this with a combination of short-button presses and long-button presses (and a really long button press!).  You do the same thing with the magnetic reed switch to program the regulator.  That seemed like a recipe for frustration.

Everything generally works as advertised.  I had to reboot the display a couple of times when I was updating firmware, but I could make everything work by the second or third try, with patience.

My problems with the system are the following.

This would be a better system if Balmar had opted to follow NMEA2000 standards instead of creating their own networking paradigm.  NMEA 2000 is a standard protocol and there  is no reason the Shunt, display and regulator connection could not be made utilizing standard NMEA200 connection cables.  Then the devices could be visible on my NMEA 2000 network.  Balmar could have an app that runs on my Raymarine MFD (like Victron has for their devices) that would allow users to monitor and program the systems

The SmartLink cables are a suboptimal design.  The connectors are big and blocky, yet the wires themselves are tiny fragile 4-strand networking cables.  If Balmar was using standard NMEA2000 cables, the connectors are smaller, and the cable housings are much more robust.

The SmartShunt device is a suboptimal design.  It is a huge blocky plastic thing.  I suppose that is fine and necessary for big systems running big amperage with big wires that need sturdy connection points for a shunt reading.  At the same time, the unit itself takes up a ton of space wherever it is located.   I think I am lucky in the sense that I am using small form-factor batteries and have extra room in my battery compartment and have space for the big shunt.

The other choice I don’t understand is why the network sockets face a direction that is perpendicular to where the battery cables enter the shunt.  Is this to help avoid a negative current shorting out the little networking terminals (if you accidentally bumped a big battery cable into parallel-aligned network sockets?)  I suppose so, but it means that the shunt needs about 3” of free space from the surface on which it is mounted to the back edge of the (fragile) network connectors.

With those caveats (and limited experience so far) I am happy with the Balmar system.